Candy Bar Trivia: How These Famous Bars Got Their Names

Why did they call it that? Candy bar trivia reveals the origin of some famous chocolate candy bar names.

Some names are coated in controversy.

While the origin of some bar names are indisputable.

But they're all interesting.

Sink your teeth into a little candy bar history. Some of the stories you may know.

Learn how these bars got their famous names.

Just how did these famous candy bars get their names? That's a good question.

Which is correct? You decide. 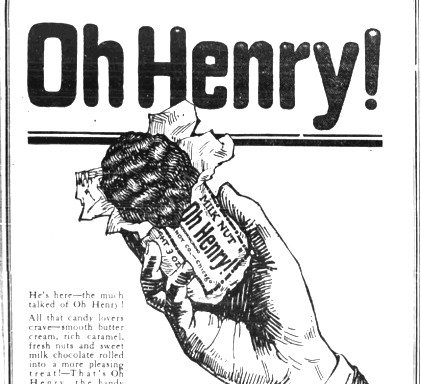 The Oh Henry! candy bar was launched in 1920 by the Williamson Candy Company in Chicago. That's a fact.

But how did it get it's name? Well, there's the official story plus a couple of other possibilities.

The Oh Henry! website states that it's named after Henry, a kid who regularly hung around the store. He befriended the company's young female candy makers.

Soon they were asking him for help.

They would shout "Oh Henry!", when they needed him. Apparently they needed him quite often. The boss heard the boy's name so frequently that he decided to call his new bar Oh Henry!

Heck, maybe he felt he owed the poor kid.

True or not that makes a great story.

But I came across two other possible sources while researching candy bar trivia. One is that it's named in honor of the American writer O. Henry.

The other is that it's named after baseball superstar, Hank Aaron.

Oh, well! I guess we'll never know for sure.

The Baby Ruth bar was unveiled in 1921 by the Curtiss Candy Company of Chicago.

Who's it named after? Well, either the dead daughter of a former President or a famous baseball player. Ruth Cleveland or Babe Ruth.

The company claims the bar was named after President Cleveland's daughter.

Skeptics note that by 1921 Ruth Cleveland, known as "Baby Ruth" during her White House days, had been dead for 17 years.

She was long gone while the "Babe's" fame was growing! She had the nickname but his nickname was similar sounding.

Did the company make up the story to avoid paying "Babe" Ruth royalties? Or is the "Babe" Ruth bit an urban myth?

I'm thinking the baseball "Babe" bit makes better sense.  But once again no one really knows.

The MilkyWay bar was introduced in 1923 by the Mars company. The name was chosen by Frank Mars.

It appears his extraterrestrial last name influenced his choice, according to an article about the Mars family by Joel Glenn Brenner.

But that's not the only version. Some say the candy was named after the 2800 acre family farm. But that wasn't established until 1930, seven years after the bar was named.

That's not the end of the story. Did you know there's been a dark version of the bar since 1926? It was called Vanilla MilkyWay because it contained vanilla nougat.

Then in 1936 the name was changed to the Forever Yours. That name sure didn't last forever. It was replaced in 1989 with the name MilkWay Dark.

Finally, in 2000 the name was altered to emphasize the dark chocolate and increase sex appeal. MilkWay Midnight.

How long before time runs out on this name? The clock is ticking...

5th Avenue candy bar was introduced in 1936. It was created by William Luden, Cough Drop King.

Apparently there's no official explanation for the name. It's lost to candy bar trivia lovers.

It seems it's either named after the famous New York avenue or after the less-glamorous Reading, Pennsylvania street.

Perhaps it's a combination of the two.

But 5th street in Reading was the location of Mr. Luden's mother's kitchen. The place were he started his business.

Can't rule out the sentimental aspect.

Bournville plain chocolate bar debuted in 1905. The dark bar was named after the site of the Cadbury factory built in 1879.

The small village was built specifically for the factory workers.  It was designed to be a healthier place to work and live. It's still a sweet place.

Idaho Spud-is a potato-shaped candy bar, hence the name. It was introduced in 1918 by the Idaho Candy Company.

They must be pretty proud of it. The wrapper proclaims it to be "The Candy Bar That Makes Idaho Famous."

It consists of a fluffy, cocoa flavored center coated in dark chocolate and dusted with coconut.  Ain't no tater in it!

This dark chocolate coated "spud" ain't no dud! The company website says it's one of the top 100 selling candy bars in the Northwest.

The Butterfinger, another Curtiss Candy Company confection, was introduced in 1923.

The bar's name was chosen by contest. Lucky Mr. Nikola Jovanovic was the winner.

He cleverly submitted his own nickname, "butterfinger". A moniker he earned because he had a clumsy gait and overate.

The Snickers bar galloped on to the scene in 1930. It was named after a beloved horse of the Mars family.

This thoroughbred has overtaken the competition. It's now the all-time top selling chocolate bar with annual sales of over $ 2 billion a year.

A mere 77 years later the company came out with Snickers Dark.

The Reggie Bar was introduced by Standard Brands Confectionery in 1978. It was named after 1970's baseball sensation, Reggie Jackson.

Sadly, this bar struck out. It's no longer in production. It's now just a bit of candy bar trivia.

The Checkerbar took the stage in 2000. It's produced by Chubby Checker, sixties singing sensation. You guessed it!

The bar is a checkerboard pattern of dark and milk chocolate squares.

Who knew candy bar trivia could be so interesting? Tasty tidbits of candy bar history. Some fact, some fiction.  Now you know more about your favorite addiction.