Where Did Chocolate History Begin? 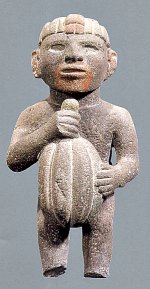 Have you ever wondered about chocolate history? Exactly when and where it all began is a mystery. But we do know that the people of Mesoamerica have enjoyed chocolate for at least 1,500 years.

The great cultures of the region considered it a gift from the gods. Reserved the drinking of chocolate for the elite and special occasions.

A special occasion like the return of an Aztec god.

Only the god wasn't a god, he was a lucky Spaniard.

Luckily for us, the Aztec introduced the Spanish visitor to chocolate. He took it home and the rest, as they say, is history.

This work is licensed under a Creative Commons Attribution-ShareAlike 3.0 Unported License. 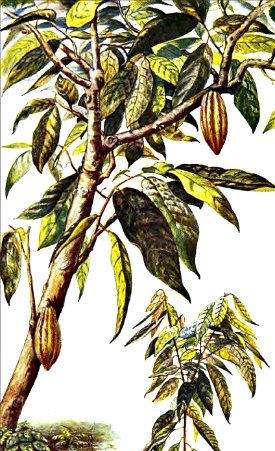 Before there was chocolate there was the cacao tree. Thousands of years ago, a woman foraging in the Amazon forest came upon it.

Bravely she plucked an odd-looking pod, broke it open and changed the world. Ok, it may not have happened just like that but it could have.

Genetic research has traced the origin of cacao to South America, in and around the Amazon basin. The tree evolved in this area but it was destined to travel north.

Who hauled the tree to its new home in the hot and humid forests of present day Central America and Mexico? Unknown. Why it was deemed worthy of such effort is known.

It seems the first documented use of cacao was to make an alcoholic drink. The sweet pulp and not the beans were prized.

Over 3,500 years ago, it was fermented into a drink with a 5% alcohol content used in important ceremonies (according to John S. Henderson, archeologist).

Sometime after it reached it's new home, it's divine purpose was discovered. 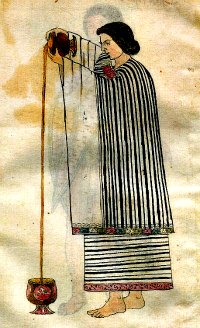 This is where the true history of chocolate began according to Maricel E. Presilla, author of The New Taste of Chocolate. She argues that here someone investigated the culinary potential of the cacao bean.

How? By processing them in the same manner as corn or chiles.

Who invented dark chocolate? I imagine it was a woman, probably following her intuition, who first sun dried, roasted and ground those bitter beans.

This process sparked some amazing changes. Picture her surprise as those ground beans turned into chocolate!

That woman deserves a statue, unfortunately her name is lost to chocolate history. She uncovered the real reason that cocoa, gift of the gods, had been put on this planet.

To be made into chocolate which enhances health and makes life worth living.

Do we thank the Olmecs or the Maya for womankind's greatest discovery? Both.

It's believed that the Olmecs first learned to grow and consume cacao.

But there's proof that the Maya had invented chocolate by around 500 A.D. A vessel with actual chocolate scraps was found in a tomb from that time period.

How great would that be? Chocolate growing in your own backyard!

The Maya began cooking up all kinds of ways to use it. 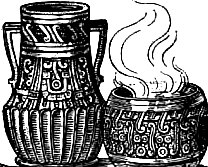 The Maya ground cocoa together with...

The resulting paste was rolled into balls. The chocolate was then dried and stored for later use.

They created many interesting dishes like chocolate ground-corn porridge and gruel. Even making chocolate red by adding annatto dye.

But it was the foamy cocoa beverage that was special.

The Maya liked their hot chocolate frothy. Bits of ball chocolate were dissolved in water. Then the drink was poured from a dish above to one below (see picture above), back and forth to create the froth.

Hot chocolate was so special it was reserved for religious and royal ceremonies and consumed mainly by the elite.

Eventually, the Mayan civilization collapsed but many of their dishes still live in Mexican chocolate cuisine.

Chocolate history marched on to the next great empire...the Aztec. 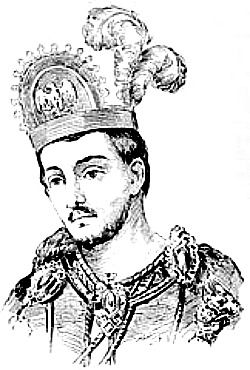 How did the Aztec learn about cocoa? Probably through trade with the Maya and other peoples. It didn't grow in the arid, high terrain they occupied.

They embraced it and traded for it. When the Aztec built their empire, they demanded cacao as tribute from the conquered southern areas where it grew.

The Aztec capital received hundreds of loads of cacao beans each year. Montezuma is alleged to have consumed fifty golden goblets a day to keep up with the demands of his empire.

If true, he's the first documented chocoholic in chocolate history.

The beans were so valuable that Montezuma kept millions of them in his palace treasury. Cacao was not only food, it was money and as precious as gold or silver.

In 1519, Cortes and his conquistadors paid a visit to Montezuma. Mistaken for a returning god, he was welcomed with gifts of cacao and invited to sample Montezuma's precious frothy chocolate drink.

In 1521, Cortes repaid Montezuma by conquering his empire.

Cortes, on a quest for riches, soon realized that cocoa was a valuable food source. He observed that one cup provided enough energy for a day's march. He had found brown gold!

Not what he had expected, but he figured he could make some cash from it. He planned to grow wealthy by growing cocoa.

So in 1528 Cortes, after establishing several cacao plantations, took some of the valuable beans back to Spain.

But you might say Montezuma exacted a little revenge by turning the Spanish elite into chocoholics.  The cocoa bean was passed to the Spaniards, the next players on the chocolate history stage. 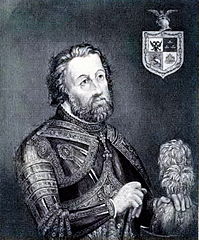 Cortes brought the Spanish chocolate from the New World.  But it was rejected, for the second time!

Poor Chris was the first.  He made his greatest discovery, cocoa beans, on 8-15-1502.  He took some of the beans but no recipe back to Spain.

But, apparently hadn't tasted them.  The Spaniards loathed it!

Cortes returned with beans and the recipe for an invigorating drink fit for a king.  But not the Spanish king!  Nor his court.

The king found Cortes' brew too bitter but saw value in it. He charged the monks with refining and safeguarding the recipe.

So they began experimenting, adding cinnamon, black pepper, and other flavors popular in Spain.

But their most inspired addition was sugar, an expensive import.

With these changes the conversion to Spanish chocolate was complete. They even invented a new tool, the molinillo, to whip the chocolate easier.

It would remain a treat for the elite for many years because it was expensive.

Supplied by its cacao plantations, Spain enjoyed its chocolate secret for nearly a century.

But knowledge of such a delicious energy drink couldn't be contained forever. It spread to Europe.

There its popularity, ensured by the Spanish addition of sugar, would drive innovation and eventually make it affordable.

The Spanish altered the course of chocolate history. By adding sugar they ignited a cacao craze so intense it still burns today. Ouch!