Chocolate Timeline: Food of the Gods to Common Candy Bar

How did the food of the gods devolve into a common candy bar?

Chocolate timeline traces the fascinating journey from noble beverage to food fit for the common man.

For hundreds of years drinking chocolate was a  privilege of the elite.

But a series of events, set in motion by the Spanish, would change that.

Sure, it would take a few centuries and lots of hard work but the results would be revolutionary.

Without these changes would you be enjoying dark chocolate today?

From ? to 1519 Mesoamerican Chocolate Drink 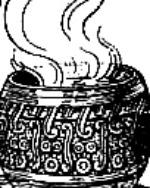 When was the spicy, gritty, greasy dark chocolate drink of the gods invented?

That's a good question.  Archeological evidence shows that the Mayan elite were enjoying this sacred drink by the year 500 A.D.

But it may be much older than that.

About 900 A.D., the great Mayan civilization disintegrated.  Fortunately, the recipe for chocolate was not lost with it.

The hot chocolate recipe survived and eventually spread to the Aztec.

The Aztec Empire considered cacao to be a gift from the gods.

So chocolate drinking was a privilege of the aristocracy.

In 1519, Montezuma extended this honor to the Spanish Conquistador Cortes.

That was a major moment in the chocolate timeline.

Cortes introduces the Spanish Court to chocolate. But the king was not impressed with the bitter taste.

He commands that the monks make modifications. Their most important change to the recipe was the addition of sugar.

Soon the improved chocolate beverage is the fashionable new favorite of the court.

They didn't feel the need to share, keeping their chocolate secret for almost a century.

Over the next 5 decades or so, it spread across Europe, creating a legion of chocholics in its wake.

But it was still too expensive for most people.

Why was it so expensive?  The Spanish improved the recipe, but the techniques for producing chocolate hadn't changed much.

It was still labor intensive to grow and process. Also governments couldn't resist levying high taxes on it.

For the first time, in the chocolate timeline, a steam-powered machine was used to grind cocoa beans. This labor saving device increased production.

As a result, the price of cocoa fell to below $3 per pound (equivalent to about $80 per pound today).

In 1828, another major leap forward was made by Conraad Van Houten of Holland. This clever fellow invented a machine that squeezed most of the cocoa butter out of the beans.

So why is that such a big leap forward? His press produced a brick of cocoa that could be crushed into a powder.

When he treated this powder with an alkali or Dutched (a process invented by him years before) it, it mixed better with liquid.

This greatly improved the texture of chocolate drinks.

Instant chocolate drinks were born. They were much easier to make so the price dropped.

Even greater numbers of people could enjoy chocolate.

How did liquid chocolate become solid? First it had to be powdered.  Fry and Son, an English company, developed the first bar of eating chocolate.

They mixed cocoa powder with some of the extracted cocoa butter and sugar. This thick mixture could be molded into bars.

The bars were a little rough by today's standard but this was real progress. Now chocolate could be carried with you in a convenient, ready to eat form.

By the 1850's many cocoa plantations had been established along the equator, around the globe, to meet the increasing demand.

He invented the conche, a machine that stirs chocolate continuously, for up to 3 days. This liquified the chocolate, smoothed out its grainy texture and reduced its bitterness.

The process greatly improved the texture of the chocolate and reduced production time. A major chocolate timeline step forward!

Liquid chocolate could be poured into the molds instead of pressed in by hand.  Now bars could be made faster and cheaper.

Who put the cheap in chocolate? Milton Hershey, for one.

He employed mass-production techniques that enabled him to produce inexpensive candy. In 1908, his milk chocolate bar sold for 2 cents, according to the website The Food Timeline.

Was the chocolate timeline about to record the death of real chocolate? In 2007, U.S. candy makers took cost cutting too far!

They asked the Food and Drug Administration to allow them to replace up to 5 percent of the cocoa butter in chocolate.

Use a cheaper vegetable fat and still call it chocolate?

So leave all the cocoa butter in chocolate. It's worth paying a little more to keep it real.

The chocolate timeline recounts how human ingenuity turned a once expensive drink into an affordable treat. A world-wide industry was built on a bean, ok a seed actually. Chocoholics are forever indebted to all who have labored to produce and to reduce the cost.