Chocolate weird facts? What's odd about the bittersweet treat you love? Nothing.

The odd thing is the bizarre and interesting ways people exploit it.

Most of us just enjoy it for what it is. A delicious, potentially healthy delight.

But others take it to a whole new level.

They turn it into art, a life-saving ration, or a thing of passion.

Then there are those that devise less healthy uses like smoking.

Or even worse, using chocolate as a weapon of war.

The fact is chocolate can be put to some weird uses. Some healthy, some heinous but all titillating.

Here's a weird fact or two about chocolate and love.

We women love our chocolate, duh!  There's no doubt about that. But just how much do we love it?

Well, if the results of a poll taken in Britain hold true for most women, then 50% of us love it more than sex. Half the women chose chocolate over amour.

The men in the survey weren't as passionate about it. But they did choose chocolate over a jaunt in a muscle car.

But wait there's more. A researcher discovered that test subjects got a bigger charge from chocolate than from kissing.

I could have told her that! 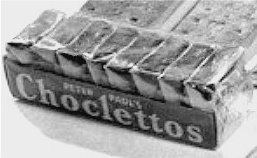 If you're going camping or preparing a survival kit, pack chocolate bars. Why?

The following stories will answer your question.

In World War II, survivors of a torpedoed ship endured 5 days in a lifeboat before being rescued. They lived off chocolate, a little corned beef and a cup of water each.

In New Zealand a dad and his two kids, lost in the wilderness for two days, survived by eating chocolate and berries.

A man managed to survive frigid weather stranded on a mountain for six days by eating powdered chocolate, uncooked rice and oats. His beverage of necessity...urine. :(

A young woman overcame all that the treacherous Scottish Highlands could throw at her. She survived for three weeks on chocolate and water.

A yachtsman, whose boat tipped over during a race, survived his nightmarish situation for four days. What did he eat? Chocolate.

Moral of the story? Don't leave home without it!

If you venture into the great outdoors, take a bittersweet treat. It might be the only reason you make it home again. 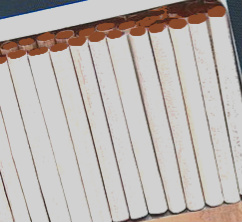 Did you know that you can smoke chocolate? Hey, I'm not recommending that you do.

Cigars can be infused with cocoa. Chocolate-flavored coronas are  popular.  They're produced by several manufacturers.

LIPS Chocolate Cigars come from the Netherlands. Looks like these are a growing trend.

But you won't find these cigarettes at your local American tobacco shop...

Why? The U.S. Food and Drug administration banned candy flavored smokes in 2009.

Considered them too tempting for the kiddies.

The Australian government agrees. It called on all states and territories to ban candy- flavored cigarettes by December of 2009.

Still want a semisweet smoke? And a safer alternative? E-cigarette. Electronic cigarettes claim to be just that. Chocolate flavored cartridges are available for the e-cigarette.

Better yet, smoke a cigar shaped chocolate cookie or chocolate candy cigarette. Safest and tastiest alternative. You can have your chocolate and smoke it too.

Your favorite candy has been going to war for hundreds of years. It has served as a survival ration, a treat, and a way to win over the locals.

Sometimes it's been used for more sinister purposes. These weird facts expose some of the worst.

In 1917 the Germans dropped poisoned candy over parts of France. Chocolate cherries wrapped in lead-coated wrappers were among the candies dropped. Many children ate them and died.

The chocolate bar bomb was devised by German agents in World War II. It was designed to detonate seven seconds after the victim tried to break a piece off. Apparently it was never used.

In World War II the Germans distributed methamphetamine to their troops to fight fatigue. They were given chocolates spiked with the drug.

Happy birthday Herr Hitler. On April 20, 1945, German troops defending the surrounded Breslau fortress were given chocolate to celebrate the Fuher's big day. Happily it was his last.

Iraq President Saddam Hussein's luck ran out in December of 2003, awwww. He was found in his rat hole with chocolate, money and guns.

T. A. Heppenheimer, in an article about Howard Hughes, talks about a strange period in Mr. Hughes life.

For months Howard would only eat Hershey bars, pecans, milk and bottled water. 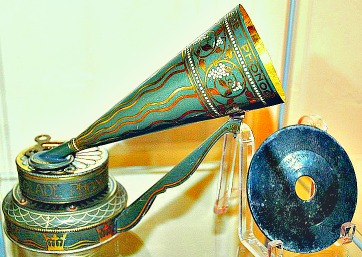 A special record player for playing a chocolate record. Sweet!

Yep, it can be shaped into all kinds of things besides bars.

Here are some weird facts about the artistic uses for semisweet.

How would you like a body double? A three-dimensional replica of your body made of chocolate.

It's called a lifecasting. Maybe you could give it to that special someone for Valentine's Day. It'd make quite an impression.

Edible records? Play 'em and then eat 'em, sweet! Chocolate has been used for that too.  See the photo above!

How about a chocolate clock? Germany is the home of the largest cuckoo clock made of chocolate.

Don't race to the candy store to buy this one. Artist Jim Victor covered a car frame with cocoa products to create a chocolate copy of Nascar Number 18.

The work of art had to be exhibited under an air-conditioned tent to keep it from melting.

Those are definitely some weird facts about chocolate usage. Unfortunately some of the ideas were dark and twisted. Seems people can get pretty creative with the stuff. How about you?

Back to Chocolate Facts