Death By Chocolate: Did You Know It Can Kill? 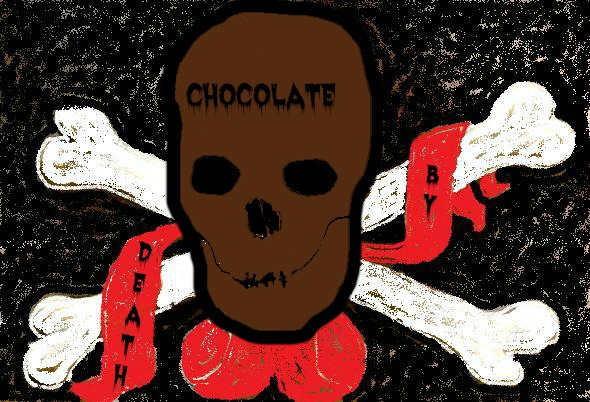 Think death by chocolate. What comes to mind? A delicious, decadent semisweet dessert, right? Not an untimely end to a person's life caused by cocoa.

Not very often, thankfully, but it can. How does it kill? Many ways.

Should you be afraid? Probably not.

Meet the real casualties of cocoa and learn from their mistakes. Don't let it do you in.

Did you know that your favorite treat can be used to murder? Yep, it's a near perfect vehicle for delivering poison.

Seems it's deliciously strong flavor conceals the tang of the toxin.

Unsuspecting recipients happily consume their treat. The deed can be done before the victim catches on.

Stories of such a heinous misuse of chocolate go way back. Way back to the 17th century at least.

Doesn't matter whether you're a bishop, a pope or common folk. You can become a victim.

Learn from these examples of death by chocolate.

The first story is from 17th century Mexico. The bishop of Chiapas and the local ladies had a disagreement. Apparently he didn't like them enjoying their bittersweet beverage during Mass.

Rumor has it that one of the ladies settled the argument by poisoning his chocolate.

True story or not, it perfectly illustrates what can happen when you get between a woman and her chocolate.

When Pope Clement XIV died in 1774, there where whispers that he was poisoned. Once again chocolate was implicated.

Flash forward to the late 1800's in Britain.

That's when Christiana Edmunds started her chocolate poisoning campaign. She would buy candy and lace it with strychnine and return it to the store.

It was resold and many people became ill. Unfortunately one young boy died before she was stopped.

Sadly these stories aren't relegated to the past. Here are some more recent examples of people using chocolate to kill.

In 1902 Tona Dunlap was accused of killing Allie Dool by giving her poisoned chocolate candy. She was later acquitted.

In 1914 chocolate and coffee containing arsenic killed one person and poisoned two others.

In 1934 a woman was charged with killing two children with strychnine laced chocolate.

In 2006 a man killed his parents by serving them a chocolate mousse containing poison. Gets a 20 year sentence.

Can chocolate ever seem as sweet after reading these stories? You might want to think twice before you eat the bittersweet offered to you.

Think hard. Your life may hang in the balance.

Why stop at poisoning people with it? Some creative folks have found other ways to use it to kill.

Here's a chronicle of a few contemptible acts by criminals utilizing chocolate.

A woman fights with husband over a chocolate cake. She claims she attempted to leave with the cake but her husband objected. They quarreled and she settled it by stabbing him. Neither the husband nor the cake survived.

In 1990 a man was charged with killing a 3-year-old girl by force-feeding her a chocolate cake. She choked to death.

An 82 year old man was attacked and robbed by thugs posing as chocolate salesmen. A week later he died of a heart attack.

A 75 year old heart patient was thrown to the ground by a drug addict. The addict was running with a box of stolen chocolate bars when the collision occurred. A month later the man died.

In 2008 a young man confronted a teenager who threw a partially eaten bar of chocolate into the window of his sister's car. The confrontation escalated into a fight. The man later died from a head injury he received during the brawl.

Only cold-hearted deviants could sink to this level. Terrible crimes that ended up causing death by chocolate.

Are you ready for more death? Here are the tales of some accidental casualties of cocoa.

In 1910 a young woman dies while trying to share her chocolate with her co-workers. She attempted to cut the bar in pieces and instead slipped and cut an artery in her leg.

In the 1960's iron pills were chocolate coated. They resembled and tasted so much like candy that many young children ate them. Some of those kids didn't survive.

A man, dropping blocks of chocolate into a cauldron, dies after falling in.

An employee of the South Bend Chocolate Company was found dead in a company machine.

A 19 year old man was found dead by his fellow employees. He had become submerged in a giant tank of molten chocolate.

A senior citizen left the Sydney hospital to buy a chocolate bar. His body was located a week later.

A 60 year old man's body was found in the streets of Aberdeen, Scotland. The old gent was carrying a box chocolates. The police think he might have been going to visit someone when he died.

A man with an eating disorder crammed an entire Mars bar in his mouth and choked to death.

A girl choked to death on a chocolate swiss roll. Unfortunately she suffered from a congenital problem that made swallowing difficult.

A woman had a heart attack and died after getting some chocolate lodged in her throat.

Now that you know chocolate can kill, there's only one question left, right?

How much chocolate would you have to eat to kill yourself?  I'm sure you're just curious not planning anything rash!

You (an adult) would have to eat more than 11 pounds of milk chocolate!  Dark chocolate?  Five or 6 pounds maybe more.  Suffice it to say, more than humanly possible!

You would tire of the taste looooong before you could eat that much.

Death by chocolate seems especially cruel, doesn't it? Something that usually brings joy to someone's life should never end up taking it. But it can.

Right back to Chocolate Facts